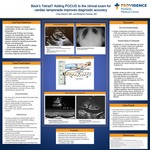 Introduction: Obstructive shock due to tamponade is an important, but rare, cause for sudden cardiovascular collapse. Accurate treatment requires prompt (and correct) diagnosis. Bedside echocardiogram can provide rapid and accurate diagnosis, however the physical exam can provide important clues to consider tamponade. In patients with conditions that predispose them to pericardial disease, such as SLE, one must have a high index of suspicion for tamponade when patients suddenly de-compensate.

Case Presentation: A 27-year old woman with a history of SLE on chronic immunosuppression, pulmonary hypertension and chronic pain presents to the Emergency Department with subjective fevers to 40C, diaphoresis and sudden onset back pain. Vitals in the ED were impressive for heart rate of 106, blood pressure of 92/67, respiration rate of 10. Labs and imaging were unremarkable. Pt admitted to hospital for potential sepsis of unclear cause in an immunosuppressed patient and was started on vancomycin and piperacillin-tazobactam. On day 5 of hospitalization, a rapid response was called due to sudden onset of heart rate to 150, respiration rate to 24, blood pressures of 80s/50s and severe chest pain. Physical exam at that time was notable for muffled heart sounds and pulsus paradoxus. Bedside ultrasound demonstrated a large pericardial effusion resulting in cardiac tamponade. Emergent pericardial fluid drainage was preformed, draining 70 cc of fibrinous, bloody fluid. After procedure, the patient had rapid normalization of hemodynamics. Pericardial fluid analysis was performed, but nonspecific. It is thought that the effusion was secondary to SLE, and the patient was discharged to home in stable condition.

Discussion: Cardiac involvement in SLE is thought to occur in more than 50% of SLE patients, however tamponade is much rarer with an estimated incidence of <1% in a review series. Tamponade portends a poor prognosis in SLE patients. During acute cardiovascular collapse in SLE, one much have a rapid approach to evaluating for tamponade. Pulsus paradoxus is one of those maneuvers; in one prospective study, it was found in 2/3 of patients with tamponade. Unfortunately, patients presenting with the classical “Beck’s Triad” (hypotension, distended neck veins and distant heart sounds) is uncommon; in once study of ultrasound-confirmed tamponade, Beck’s Triad was present in 0% of patients. Fortunately, there are key findings on POCUS exam that, in conjunction with the physical exam, can lead to rapid and accurate diagnosis of tamponade, for instance the absence of a dilated IVC can exclude tamponade with 97% sensitivity.