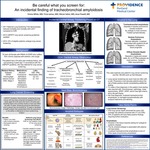 Be Careful What You Screen For: An Incidental Finding Of Tracheobronchial Amyloidosis

Introduction: The 2011 National Lung Screening Trial (NLST) demonstrated a reduction in morbidity and mortality with LDCT compared to CXR. In 2013 the USPSTF began recommending CT scan for lung cancer screening in appropriate patients but, the 2015 National Health Interview Survey (NHIS) demonstrated that less than 5% of eligible patients received screening. The NLST also demonstrated a high rate of false positives, incidental findings, and the need for further invasive testing. When deciding to screen, patients and providers are tasked with reconciling these risks and benefits. In this case, we explore one patient’s incidental findings, and the work-up that ensued.

Our Case: Our patient is a 70-year old female with PMHX of COPD (GOLD 1) who suffers from dyspnea with exertion, and cough. The patient did not tolerate LAMA therapy but her symptoms improved with the addition of an ICS/LABA inhaler. She has had 1-2 COPD exacerbations per year. She has a 54-pack year smoking history and quit smoking 2 years ago. In accordance with USPSTF guidelines and with shared decision making, the patient was referred for lung cancer screening with LDCT. LDCT revealed thickening of the patient’s right and mainstem bronchi, and trachea. In light of this, the patient was referred to pulmonology for bronchoscopy. Bronchoscopy demonstrated irregular thickening and heaped pink mucosa. Biopsies were examined by a pathologist who determined the tissue to be amyloid. Upon follow up in primary care clinic, the tissue samples were located and again sent for amyloid sub-typing which identified AL amyloid. With this finding, the patient required subsequent testing with free light chains, SPEP, and UPEP to rule out a plasma cell dyscrasia. Finally, a fat pad biopsy was ordered to evaluate for systemic amyloidosis. With all of these tests negative, the patient could be diagnosed with localized pulmonary AL amyloidosis & specifically tracheobronchial amyloidosis. This condition is managed symptomatically and does not require systemic chemotherapy.

Discussion: In this case, we explored the diagnosis of a patient with central airway obstruction due to amyloidosis found incidentally during lung cancer screening. In our patient, the incidental finding of central airway obstruction required further testing with bronchoscopy, pathology, mass spectrometry, SPEP, UPEP, serum free light chains, and a fat pad biopsy which were ultimately negative. The high rate of false positive screens and the need for subsequent testing are concerns physicians must address with their patients when recommending lung cancer screening CT. This should be balanced with the potential for reduced mortality and morbidity with CT screening, through higher cure rates, less invasive lung resection, and increased rates of smoking cessation.