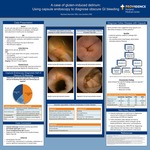 A Case Of Gluten-Induced Delirium:

Case Presentation: An 81-year-old male presented with hypoactive delirium of a few hours duration. His partner noticed inattentiveness, confusion, and inability to complete his daily activities the day of admission. Review of systems was otherwise negative. He had a previous stroke a year prior, sick sinus syndrome with a pacemaker, and myocardial infarction with stent placement just over 6 months before admission. On admission, he was tachycardic to 101, with normal blood pressure and mild anemia (hemoglobin 12.1 g/dL, from 14.1 g/dL a month prior). Infectious work up including viral panel, white count, procalcitonin, and urinalysis was negative. Creatinine was near the patient’s baseline (1.2 mg/dL), but BUN was up to 82 mg/dL from 17 mg/dL a month prior. Head CT was negative for any new process. Initial work up revealed positive fecal occult blood, but subsequent evaluation with upper endoscopy and colonoscopy found no cause. Hemoglobin trended downward and the patient received blood transfusions. Small bowel capsule endoscopy, however, showed evidence of ulcerative jejunoileitis, with subsequent duodenal pathology significant for gluten sensitive enteropathy (celiac disease), Marsh type 3 (destructive type). Serum studies showed elevated tissue transglutaminase IgA, anti-gliadin antibody IgG and IgA. He was started on a gluten free diet and has shown improvement in antibodies, stabilization of anemia, and significant improvement in mental status. Repeat capsule endoscopy has also shown improvement in jejunal ulceration.

Discussion: Capsule endoscopy is an excellent diagnostic tool when the source of a GI bleed cannot be found with EGD or colonoscopy. Not only does it have greater than 96% positive predictive value for diagnosing celiac disease, it can also identify other small bowel disorders including Crohn’s disease. This case highlights the importance of diagnosing celiac disease as when left untreated, complications such as ulcerative jejunoileitis can lead to bowel perforation, blood loss anemia, and T-cell lymphoma; however it can be effectively treated with a gluten free diet.