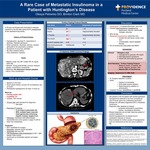 A Rare Case Of Metastatic Insulinoma

In A Patient With Huntington’s Disease

A 49-year-old female with past medical history of Huntington’s disease presents to the ED after being found unresponsive at her assisted-living facility. She was noted to be hypoglycemic with a glucose of 21 and responded to dextrose. For the past several months, patient had symptoms of dizziness, tremors. She has no history of diabetes, and only home medication is Zyprexa. Patient required D10 drip to maintain glucose levels. Given patient’s psychiatric history, there was concern for surreptitious use of diabetic medications. Labwork showed an insulin level of 163 and an elevated C-peptide of 7.0 consistent with endogenous insulin secretion. Patient underwent a 72-hour fasting protocol which revealed a glucose of 23, C-peptide of 4.1 and insulin of 101, undetectable beta-hydroxybutyrate levels and pro-insulin level of 782 (normal <8), which are consistent with a diagnosis of insulinoma. She was started on diazoxide, which diminishes insulin secretion, to treat the hypoglycemia. Patient underwent a pancreas CT protocol which showed multiple hypervascular hepatic masses up to 9 cm and one 4 cm mass in pancreatic tail concerning for metastasis. Pathology revealed metastatic well-differentiated neuroendocrine tumor grade 3. She was not a candidate for surgical resection of tumors and she was started on Octreotide 200 mcg TID. Patient underwent two Y90 therasphere radioembolization treatments, 2 months apart with improvement of hypoglycemia and discontinuation of diazoxide. Patient remains on Octreotide LAR injection every 4 weeks with frequent glucose monitoring.

Insulinoma, although rare, occurs in 1-4% of the population and is the most common type of functional neuroendocrine tumor of the pancreas. It secretes insulin which results in hyperinsulinemic hypoglycemia. Diagnosis involves persistent hypoglycemia with glucose <50 mg/dL, neuroglycopenic symptoms and prompt relief after glucose administration. Gold standard diagnosis is a 72-hour fast and measurement of plasma insulin, C-peptide and pro-insulin, which detects 99% of insulinomas. After lab confirmation, imaging is necessary to localize the tumor with either CT, MRI or EUS. Surgical resection is curative in most patients. Other treatment modalities include injection of octreotide, EUS-aided alcohol ablation, radio-frequency ablation or embolization of insulinoma, as well as targeted therapy with everolimus or sunitinib.

Malignant insulinomas are extremely rare and often invade into surrounding soft tissue or have lymph node or liver metastasis. They are usually unresectable and require targeted therapy.

We present the case of a 49-YO patient with Huntington’s disease who presented with severe persistent hypoglycemia secondary to metastatic insulinoma. Diagnosis of insulinoma is often delayed or missed as symptoms may be attributed to psychiatric, cardiac or neurological disorders or medication misuse. Clinicians should be aware of insulinoma as a cause of life-threatening hypoglycemia.