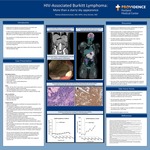 Introduction: •People with HIV infection are at least 50 times more likely to get lymphoma as compared to the general population. •25-40% of these lymphomas will be Burkitt Lymphoma (BL) – an aggressive B cell malignancy with a high proliferative rate and potentially fatal within months if not diagnosed and treated in a timely manner. •This translates to a 10-20% individual life-time risk of BL for an HIV infected person. •The incidence of BL declined after the introduction of highly active antiretroviral therapy (HAART), but to a lesser extent than other HIV-associated malignancies. •Epidemiologic studies suggest the incidence of BL will increase as the HIV-infected population ages

Case Presentation: A 24 yo woman with known HIV presented with 1 month of intermittent fevers, chills, nausea and diffuse abdominal pain most notable in the epigastric region. Her symptoms acutely worsened in the last week, prompting her visit to the Emergency Department.

Hospital Course: •Started on broad spectrum antibiotics for presumed endocarditis in the setting of active IVDU •TTE revealed no vegetations, blood cultures negative •CT abdomen pelvis obtained the night of admission demonstrated diffuse gastric thickening with evidence of omental seeding with nodularity and splenomegaly •Endoscopy completed the following day found a large nonbleeding gastric ulcer and diffuse gastric inflammation. •Pathology of endoscopic biopsies of the gastric antrum identified Diffuse Large B-cell Lymphoma (DLBCL) and H.pylori. •Immunohistochemistry test positive for Epstein Barr Virus. •The patient was started on Biktarvy (last use 1-3 months prior) •PET scan was done for staging revealed advanced disease with a diffuse tumor burden •MYC rearrangement detected on FISH analysis, consistent with high grade Burkitt lymphoma •She completed 1 cycle of Short Course EPOCH-RR with a guarded prognosis. There was high concern for TLS and gastric perforation due to the extensive abdominal tumor burden. Fortunately, neither happened. •Thus far, she has tolerated 3 of the anticipated 6 chemo cycles with relatively minor complications by comparison including bradycardia, frequent NSVT and neutropenia necessitating adjustments to her chemotherapy regimen and schedule delays. •Her pain control has remained a challenge in light of her ongoing IV substance use. Discussion: •Lymphoma in the leading cause of cancer-related deaths among HIV-infected patients in the anti-retroviral therapy era. •Burkitt lymphoma (BL) is a highly proliferative NHL deriving from B cells and with characteristic oncogenic pathways, including translocation in the MYC gene-- a gene that normally plays a role in controlling cell proliferation, differentiation and apoptosis. •The WHO classifies 3 different clinical variants of BL: endemic, sporadic and immunodeficiency-associated. •Unlike other HIV-associated lymphomas, BL is frequently noted in patients with CD4 cell counts >200 and viral loads suppressed by ART •HIV-associated BL typically presents with extra-nodal disease, mostly commonly the stomach •Intra-abdominal BL may present with abdominal pain, nausea, vomiting, GI bleeding, bowel obstruction; fever, night sweats, weight loss (B symptoms), fatigue and malaise are also common. •Approximately 70% will present with wide spread disease (stage III or IV), in addition to elevated LDH and uric acid levels •The classic “starry sky appearance” is not often seen in the histological examination of HIV-associated BL. Most are positive for Epstein Barr Virus (EBV). •Recent studies suggest the pathobiology of HIV-associated lymphomas is distinct from non-HIV lymphomas. HIV may directly induce B-cell activation. Further oncogenic viruses, as EBV, are more prevalent in HIV-associated lymphomas. •Survival with HIV-associated BL is approaching that of HIV-negative BL thanks to the development of short duration, dose intensive combination chemotherapy with aggressive CNS prophylaxis, the availability of rituximab and the implementation of effective ART •Rare cases of IRIS- associated Burkitt Lymphoma have been reported, typically within 6 months after the initiation of HAART. It is unclear if that was the case with our patient.