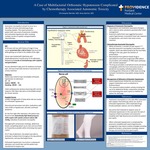 Introduction: Autonomic neuropathy is known to occur as a side effect of some chemotherapy drugs, including cisplatin. This reports presents a patient with new onset of autonomic instability and orthostatic hypotension after receiving multiple rounds of cisplatin and gemcitabine chemotherapy.

Case Presentation: An 81-year-old man with history of stage III lung cancer presented after a fall at home that occurred while getting out of bed in the middle of the night in the setting of recent malaise and poor oral fluid intake. His cancer was treated with surgical lobectomy and thoracic lymphadenectomy five months prior to his admission, and three rounds of chemotherapy with cisplatin and gemcitiabine. He had been admitted to the same hospital three days prior for weakness and back pain and was empirically started on tamsulosin for urinary retention and was discharged with a foley catheter in place.

On presentation he was noted to have marked orthostatic hypotension, and during the first night of admission he had high blood pressures while sleeping, with systolic blood pressure greater than two hundred mmHg. Postural hypotension did not improve over the first twenty-four hours after multiple intravenous fluid boluses. He was managed by discontinuing exacerbating medications including tamsulosin and benadryl, as well as treatment with physical therapy, an abdominal binder, and minimizing the amount of time spent supine. He was discharged on the fifth day of hospitalization after clearance by physical therapy.

Discussion: Although this case initially appeared to be a straightforward case of orthostatic hypotension related to hypovolemia, it became more complicated when the patient continued to display orthostatic hypotension after initial fluid resuscitation and discontinuation of associated medications. Further suggesting autonomic dysfunction was an inconsistent response of heart rate in relation to hypotension, as well as markedly elevated systolic blood pressure readings at night while the patient was supine. While not a common side effect, there are prior documented cases of autonomic neuropathy in association with cisplatin, which was determined to be the most likely etiology in this case, given the timeline of presentation. An additional factor complicating this case was the issue of addressing orthostatic hypotension in a patient with autonomic instability causing intermittent severe hypertension such that the use of midodrine was not an option. This required creative problem solving including the use of an abdominal binder and compression stockings in order to get the patient stable for discharge from the hospital.