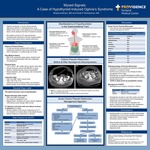 A Case Of Hypothyroid-Induced Ogilvie’s

Ogilve's syndrome, or acute colonic pseudo-obstruction (ACPO), is characterized by acute dilation of the colon, in the absence of a mechanical lesion, which obstructs the flow of intestinal contents. Pseudo-obstruction typically occurs in the critically ill, though the underlying pathophysiology is poorly understood and the etiology is often multifactorial. We present a case of a 51-year-old morbidly obese woman presenting with symptoms of severe hypothyroidism found to have massive acute colonic pseudo-obstruction.

A 51-year-old African-American woman with BMI of 68, OSA, CHF, hypothyroidism and medication non-adherence presented with severe generalized weakness. On admission she was found to have TSH >150 and undetectable free T4. The patient was started on oral replacement therapy but despite this developed acute encephalopathy several days into the admission. She was evaluated for myxedema coma but lacked bradycardia, hypothermia and hyponatremia. Along with encephalopathy, she had poor oral intake and mild nausea, but no vomiting or abdominal pain, and continued having regular bowel movements. CT chest abdomen and pelvis was obtained in the work up of her encephalopathy, which revealed massive dilation of the cecum measuring 17 cm with no obvious mechanical obstruction concerning for pseudo-obstruction. GI and surgical services were consulted, and the patient was ultimately managed non-operatively with neostigmine given her comorbidities. Nasogastric and rectal tubes were placed for decompression and subsequent CT scans revealed decompression without perforation or re-obstruction. The patient was discharged several days later on thyroid replacement with normalization of her T4 and no evidence of re-obstruction.

Acute colonic pseudo-obstruction typically occurs in hospitalized patients in severe illness or after surgery and is hypothesized to be caused by an autonomic imbalance resulting in a hypotonic bowel. This mechanism was originally hypothesized by Ogilvie, who originally suggested lack of sympathetic signaling in the colon1. Sympathetic excess rather than parasympathetic causes are felt to be the more likely etiology, as evidenced by ACPO being more prevalent in the critically ill with high sympathetic drive. Neostigmine, an acetylcholinesterase inhibitor and parasympathomimetic is commonly used to reverse pseudo-obstruction, further suggesting restoration of autonomic balance as a central pathophysiological mechanism. Neostigmine should be used with caution and often requires ICU monitoring given risk of precipitating bradycardia and bronchospasm. Case series of ACPO point to critical illness, surgery, electrolyte imbalance as the most common causes, but hypothyroidism is a rare cause of pseudo-obstruction. Hypothyroidism is a common condition and known to have several manifestations in the GI tract including esophageal dysmotility, delayed gastric emptying, and diminished colonic motility. This case represents the latter, which typically manifests as constipation, but instead presented as a life-threatening pseudo-obstruction which was masked by encephalopathy, body habitus, and lack of prominent abdominal physical examination findings. When conservative management fails, or the cecum exceeds 12cm, typically decompressive colonoscopy or surgery is warranted. In this case, given the patient’s operative risk factors, chemical decompression with neostigmine was administered and the patient improved.