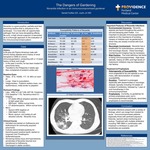 The Dangers Of Gardening – Nocardia Infection In An Immunocompromised Patient

The Dangers Of Gardening –

Nocardia Infection In An Immunocompromised Patient

Introduction: Nocardia is a gram-positive, partially-acid fast, aerobic, branching bacillus that can be found in soil and water. It is typically an opportunistic pathogen, with most infections occurring in the immunocompromised. Disease can be localized or disseminated, preferring pulmonary, nervous, and cutaneous tissues. Optimal antimicrobial therapy depends on speciation of the isolate, as Nocardia may exhibit variable antimicrobial susceptibility. A high clinical suspicion and appropriate empiric antimicrobial therapy is necessary. This clinical case highlights the importance of these two factors, as well as the difficulties associated with treatment of disseminated Nocardiosis in the immunocompromised patient.

Case Presentation: A 56-year-old Filipino-American male with a history of renal transplant in 2008 due to Membranoproliferative Glomerulonephritis on chronic immunosuppression presented with a three-month history of recurrent cough and chills, worsening in the past week. He had sought medical care twice during this period and had received full courses of Doxycycline and Amoxicillin-Clavulanate with intermittent improvement. He then presented hypoxic, febrile, and tachycardic to the emergency room, with a right upper lobe consolidation and right posterior axillary pain. Respiratory and blood were drawn, as well as Mycobacterium Tuberculosis sputum cultures given recent travel to the Philippines. Patient was then started on Ceftriaxone and Azithromycin for treatment of community-acquired pneumonia. He gradually improved over the next few days, but after several days, blood and sputum cultures were positive for what was found to be Nocardia nova. He also had right axillary and calf abscesses that were subsequently drained and growing Nocardia nova. MRI of his brain, CT of his abdomen, and transthoracic echocardiogram were performed to evaluate the extent of disease, and all were negative. He was transitioned to Imipenem and Trimethoprim-Sulfamethoxazole for treatment of disseminated Nocardiosis. While on therapy, he developed severe hyponatremia, which was thought to be due to current treatment. He was transitioned to Ceftriaxone based on available sensitivities and had improvement of his drug toxicities and symptoms on this regimen. After six weeks of IV antibiotics, he was transitioned to oral Cefpodoxime for an expected twelve months of therapy. Furthermore, nephrology discontinued his Azathioprine to reduce his immunosuppression, and his graft has continued to function well.

Discussion: Nocardia is a ubiquitous organism that uncommonly becomes pathogenic to humans, but infections can be serious, especially in the immunocompromised. It is important to have a high clinical suspicion in immunocompromised patients. As more information emerges about this genus, it is important to fully speciate and obtain antimicrobial sensitivity patterns, which can be quite variable. Duration of treatment in immunocompromised patients and those with CNS infections is at least one year. There are no guidelines for primary prophylaxis for Nocardiosis. Some experts recommend indefinite secondary prophylaxis in patients with ongoing immunosuppression.