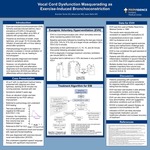 Intro: Exercise-induced bronchoconstriction (EIB), previously exercise-induced asthma, has a high prevalence in the community. Patients with these symptoms are typically diagnosed clinically and treated empirically with pre-exercise albuterol. Eucapnic voluntary hyperventilation (EVH) has been used to objectively test for EIB and can help to confirm the diagnosis, as well as rule out other causes such as exercise-induced vocal cord dysfunction (EIVCD), which may mimic EIB.

Case Description: A 42-year old female with no significant medical history, presented with dyspnea and chest tightness, starting 20-30 minutes into running exercise. Symptoms started five years ago. She was given an albuterol inhaler and later montelukast by her PCP, without improvement. She was referred to pulmonology and underwent EVH testing. Testing was negative for EIB. However, the inspiratory limb of her flow volume loop was flattened on post-exercise spirometry. She was subsequently referred to ENT for videolaryngoscopy (VLS) to rule out EIVCD. VLS showed paradoxical vocal cord function with rapid and forced breathing, and the diagnosis of EIVCD was made. Albuterol and montelukast were discontinued. She underwent outpatient speech language therapy with significant improvement in her symptoms.

Discussion: EIB has a prevalence of 5-20% in the general population and may affect up to 90% of patients with symptomatic asthma. It typically presents as shortness of breath, chest tightness, and cough 10-15 minutes after initiation of exercise. In a community setting, EIB is typically diagnosed and treated based on symptoms alone. However, not all patients with these symptoms have EIB, and may fail expensive inhaler treatments. EVH can help to objectively confirm the diagnosis of EIB and help rule out other potential causes such EIVCD.

EVH requires the patient to breath at a high target minute ventilation to simulate exercise while breathing a set gas mixture to maintain eucapnia. Spirometry is then performed at 3, 5, 10, 15, and 20 minutes to evaluate for a decrease in post-exercise FEV1 >10%, indicating EIB. It is considered by many literature sources to be the “gold standard” of EIB diagnosis when compared to exercise testing and methacholine challenge.

Recent studies utilizing EVH have shown increasing evidence that EIVCD may be a more common cause of exercise-induced symptoms than previously thought. EIVCD can be suggested on EVH by flattening of the inspiratory flow volume loop on post-exercise spirometry. EIVCD can then be confirmed by videolaryngoscopy (VLS). EIVCD is treated with speech language therapy, which is much different from EIB. Utilizing EVH to objectively diagnose EIB can likely lead to a decrease in inappropriate medication use and healthcare utilization with the added benefit of more accurate treatment modalities.