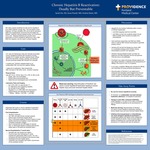 A 51-year-old Vietnamese male with chronic hepatitis B presents with symptoms of acute hepatitis. 2 months prior, his PCP had discontinued Tenofovir, for which he had been taking for the past decade, based on an undetectable viral load and a negative HBeAg. 1 month later, his viral load soared to 796 million so Tenofovir was restarted. On admission a few days later, the patient had scleral icterus and jaundiced skin. He had severe transaminitis, coagulopathy, and a total bilirubin of 7.7. His CT showed hepatitis, but no cirrhosis. With other etiologies ruled out, he was diagnosed with acute on chronic hepatitis B reactivation due to discontinuation of Tenofovir.

He was discharged once his LFTs improved though his total bilirubin continued to rise. The liver transplant team followed the patient post discharge and one month later, he represented with decompensated liver cirrhosis which progressed to fulminant hepatic failure requiring a liver transplant.

An estimated 350 million people in the US live with chronic hepatitis B, though only a third are aware of their diagnosis. Untreated hep B accounts for over 600,000 deaths per year from HCC and end stage liver disease. There is no cure because hep B virus remains in hepatocytes by integrating its DNA into our own and by turning its DNA into stable mini-chromosomes. Tenofovir AF, the 1st line treatment, works only by inhibiting viral replication outside the nucleus, but does not eradicate viral DNA (point). A negative viral load, as seen in our patient, indicates only medication adherence and not a cure. Only 1% of patients achieve “seroclearance of HBsAg,” constituting a functional cure and can discontinue medications at that point, but 99% of patient require indefinite treatment. Our patient did not have labs consistent with a functional cure. Tenofovir has a black box warning that if discontinued, can cause hepatitis B reactivation leading to severe hepatic injury and even fulminant hepatic failure. It took only one month of discontinued Tenofovir to set in motion our patient’s path for a liver transplant. Fortunately, he is doing well now.

The take home points are that, unlike Hepatitis C, 99% of hep B patients require indefinite treatment to minimize the risk of premature death. Physicians should recognize that only seroclearance of HBsAg suggests a functional cure. Undetectable viral loads indicate successful treatment adherence.

Discontinuation of treatment can result in hepatitis B reactivation and even fulminant hepatic failure. From a broader perspective, clinicians need to be vigilant of undiagnosed chronic hepatitis B carriers, especially in patients immigrating from countries with high prevalence or patient with high risk behaviors. These patients are at risk for reactivation with any immunosuppressive therapy such as steroids or cancer therapies.