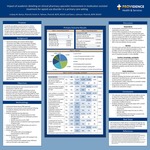 Title: Impact of academic detailing on clinical pharmacy specialist involvement in medication assisted treatment for opioid use disorder in a primary care setting

Introduction: Opioid prescribing and opioid overdose deaths have increased steadily since the 1990s, reaching a 6-fold increase between 1999 and 2017. The opioid crisis, as it became known, was declared a public health emergency in 2017. In 2018 alone, an estimated two million people had a diagnosed opioid use disorder (OUD). The use of medication-assisted treatment (MAT) for OUD reduces the use and cravings of opiates, and risk of all-cause and opioid-related mortality. The inclusion of clinical pharmacy specialists (CPSs) on multidisciplinary healthcare teams has been shown to improve health outcomes, increase cost-effectiveness, and improve the quality of healthcare. Nevertheless, CPS involvement in MAT for OUD in a primary care setting remains limited. This study will provide information regarding barriers to CPS involvement in MAT, and the effectiveness of academic detailing provided to CPSs in increasing CPS involvement.

Objectives: The objectives of this project are to identify and describe the most common barriers to CPS involvement in MAT for OUD, then assess the impact of academic detailing on CPS comfort level with being involved in the care of patients undergoing MAT for OUD in the primary care setting. Additionally, this project will assess the hypothesis that academic detailing will increase the number of patients with a CPS involved in the treatment of OUD.

Methods: Study participants are CPSs recruited from a large medical group in Oregon and SW Washington who completed a survey before and after participating in academic detailing. The pre-survey was used to assess demographics, current involvement with MAT, perceived barriers to involvement in MAT, and asked participants to anonymously assess their comfort level, knowledge, and beliefs regarding MAT for OUD using a 0-5 point scale. Academic detailing was developed based on reported barriers, and consisted of handouts, two 45 minute interactive presentations, and small group work with case-based application. Participants then filled out a post-survey to re-assess their comfort level, knowledge, and beliefs regarding MAT for OUD following academic detailing. Survey results were compared and summarized by using either % of respondents in each category or mean (standard deviation) for each question across all respondents, then compared using a Wilcoxon-rank-sum test. CPS involvement in MAT will be reassessed using a survey or electronic intervention tracking in June.