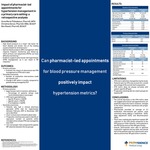 Impact of pharmacist-led appointments for hypertension management in a primary care setting: a retrospective analysis

Impact of pharmacist-led appointments for hypertension management in a primary care setting: a retrospective analysis

Introduction: High blood pressure is a major risk factor for heart disease and stroke, two of the leading causes of death for Americans.1 Evidence supports the idea that pharmacist-led hypertension management can result in overall blood pressure reduction; however, it remains unclear whether pharmacist-led initiatives can also improve performance metrics.2-5

Methods: Primary outcome data was measured via metric inventory, defined as percentage of patients who had reached their blood pressure goal. Two time points were compared at two primary care clinics (1 month before the pharmacist-led HTN appointments were established compared to 4 months after) to determine a potential change in percentage of patients achieving BP goal. Secondary outcome data was obtained via chart review for patients whose hypertension was managed by the pharmacist (n=50) and matched patients managed by their primary care physician (n=50).

Results: Overall, the metric for Clinic A decreased from 74.7% to 73.5%, and Clinic B decreased from 72.2% to 65.5%, illustrating less patients had achieved their blood pressure goal. However, a change in the metric definition occurred in the middle of the study period, which may explain the percentage decrease. Examining pharmacist visits, only 38% of patients were at their goal blood pressure initially, but 80% of patients were at their BP goal during their final visit. Pharmacists had an average of 2.2 medication interventions per patient per visit.

Conclusions: The overall change in the metric does not suggest pharmacist-led appointments for hypertension management can positively impact the metric; however, changes in the metric definition interfered with proper assessment. Overall, pharmacists were able to optimize medication regimens, and almost half of the patients who were not at goal initially were able to achieve it within 4 months.