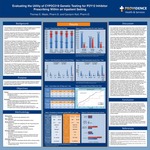 The emergence of pharmacogenomics offers the opportunity to practice precision medicine across health care. In patients presenting with acute coronary syndrome (ACS) and undergoing percutaneous coronary intervention (PCI), dual antiplatelet therapy (DAPT) is routinely prescribed for 12 months. DAPT consists of a P2Y12 inhibitor (clopidogrel, ticagrelor, or prasugrel) plus aspirin. Of the P2Y12 inhibitors, clopidogrel is uniquely impacted by CYP2C19 status. About 30% of the North American population carry at least one CYP2C19 allele associated with reduced metabolism. Ticagrelor and prasugrel are not impacted by CYP2C19 metabolism, but are associated with increased bleeding and cost. Current guidelines favor the use of the latter, with routine genetic testing not recommended. Recent studies have provided positive evidence that a genotype-guided approach results in improved outcomes. This study aims to identify how CYP2C19 genetic testing may impact prescribing practices. This is an IRB-approved, retrospective cohort analysis of P2Y12 inhibitor prescribing and outcomes following PCI. Chart review within the electronic health record was completed from September 2016 to September 2019 among patients presenting to two large, tertiary medical centers. Patients included those >18 years old, with an index diagnosis of ACS. Patients were excluded if they had a history of cancer, pregnancy, or if they did not have a documented encounter after 30 days following PCI. The primary outcome was the incidence of optimal P2Y12 inhibitor prescribing. Secondary outcomes included major adverse cardiovascular events (MACE) and stent thrombosis at 30 days and 1 year. A cost analysis was also completed utilizing a simulated genotype-guided strategy. A total of 401 patients were included within the primary analysis, with clopidogrel and ticagrelor being prescribed at rates of 73.1% and 26.1%, respectively. Prasugrel was prescribed at a rate of 0.8%. There was no difference among prescribing for an index diagnosis of NSTEMI vs. unstable angina (p=0.71). However, prescribing was different for NSTEMI vs. STEMI (p=0.00) and unstable angina vs. STEMI (p=0.00). Patients prescribed clopidogrel were readmitted for MACE or other ischemic events significantly more than those prescribed ticagrelor (p=0.01). Additionally, event rates were increased within the initial 30 days. In a cost-analysis with a simulated genotype-guided strategy, reduced readmission rates resulted in total cost-savings of $527,377, or $1,325 per person. This study shows that overall P2Y12 inhibitor prescribing rates compare favorably to the expected population distribution of CYP2C19 alleles. However, individuals with loss of function alleles are potentially being prescribed clopidogrel at discharge, thus increasing their risk for adverse outcomes. As these event rates are more pronounced within the initial 30 days, initiating CYP2C19 screening in the inpatient setting may help minimize early readmissions. Additionally, a genotype-guided approach may result in cost-savings over 1 year.