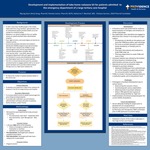 Title: Development and implementation of take-home naloxone kit for patients admitted to the emergency department of a large tertiary care hospital

Background/Purpose: In 2017, the United States Department of Health and Human Services (HHS) declared the opioid epidemic as a public health emergency as more than 70,000 people died from drug overdoses. Approximately 75% percent of unintentional opioid-overdose deaths occurred outside of a medical setting. In order to combat the opioid crisis, the US Surgeon General urged prescribers and pharmacists to increase access to naloxone for individuals who are at risk for opioid overdose. Community overdose education and naloxone distribution (OEND) programs have demonstrated that take-home naloxone kits are associated with reduced opioid-overdose death rates and are cost-effective. From January 2016 – June 2019, about 4,016 emergency department (ED) and urgent care visits in the Portland metropolitan area were identified to be due to opioid overdose. Recent data from the Centers for Disease Control and Prevention (CDC) indicates a continuing upward trend, making the ED a critical intervention point for providers and pharmacists to engage patients with at-risk of opioid overdose and provide evidence-based interventions such as take-home naloxone kit. The primary objective of this study is to develop and implement a pharmacist driven take-home naloxone kit protocol. The secondary objective is to increase access to naloxone by prescribing and dispensing kits to at-risk patients in the emergency department.

Methods: A retrospective quasi-experimental, pre- and post-protocol analysis, will be used to compare the number of prescriptions written prior to implementation of protocol (April 1, 2017 to September 1, 2019) to the number of take-home naloxone kit dispensed post implementation of the protocol. Inclusion criteria include patients 18 years or older and admitted to ED for treatment of opioid overdose, or with risk factors of opioid overdose. The primary endpoint is number of naloxone prescription written and take-home naloxone kits dispensed.

Results: Key stakeholders were identified and engaged in developing the protocol. Operational and cost consideration were reviewed. Various factors affected development and implementation of the study.

Conclusions: Adaptation of parts of the study to take place in two large tertiary care hospitals.