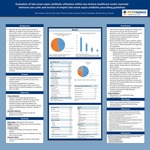 Neonatal late-onset sepsis (LOS) is commonly defined as an infection occurring after the first 72 hours of life. Late onset sepsis is a common complication of prolonged admission to the neonatal intensive care unit (NICU) and is a major cause of morbidity and mortality. Due to risks associated with LOS, empiric antibiotics can be inappropriately prescribed, which may lead to multi-drug resistant bacteria, increased healthcare costs, alterations in microbiome, increased risk of necrotizing enterocolitis (NEC) and mortality. Current Providence Oregon regional guidelines for suspected LOS in the NICU do not provide clear prescribing or antibiotic dosing recommendations, have not been updated since 2011, and are underutilized by providers. All of which can lead to inappropriate antibiotic prescribing. Providers at two tertiary medical centers agreed upon using American Academy of Pediatrics (AAP) Red Book for antibiotic dosing in October 2019. A retrospective chart review was conducted to evaluate the appropriateness of antibiotic utilization in the NICU at two tertiary medical centers, and to promote standardization of antibiotic prescribing for LOS through revision of the 2011 regional empiric antibiotic guidelines for suspected LOS in the NICU. This study was approved by the institutional review board. Patients admitted to the NICU between September 1, 2016 through August 31, 2019 with confirmed or suspected LOS who received at least one dose of empiric antibiotics starting after 72 hours of life were included in the study. The primary outcome is to measure the appropriateness of antibiotic utilization compared to the 2011 Providence Oregon Regional guidelines and recommendations from the neonatal antibiotic dosing references AAP Red Book, Lexicomp, Neofax, or “other” if dosing did not match one of the specified reference. The secondary outcome measure of revision and implementation of new late-onset sepsis guidelines is still in progress. Exploratory outcomes include antibiotic selection, indication, and duration of therapy. Patient data such as risk factors for LOS, diagnosis, gestational age, postnatal age and postmenstrual age at time of antibiotic initiation, birth weight, blood culture and susceptibilities, and outcomes such as mortality, transfer to a higher level of care, discharge home, and further courses of antibiotics were also included as exploratory outcomes. Thirty-five patients were identified as having at least one instance of LOS, and there were 45 instances of LOS total, as some patients had more than one occurrence. After excluding antibiotics dosed by pharmacy (vancomycin and gentamicin), 55 antibiotics were evaluated based on neonatal antibiotic dosing reference. For the primary outcome, 47% (21) empiric antibiotic regimens did not correspond with the 2011 guideline. Fifty-three percent (29) of antibiotic dosing matched AAP Red Book recommendations, 29% (16) matched Neofax, 5% (3) matched Lexicomp, and 13% (7) other. Nearly half of the empiric antibiotic regimes were not consistent with 2011 Regional guidelines. These inconsistencies are likely attributable to the vagueness of the guideline. In addition, while the majority of dosing matched AAP Red Book, antibiotic dosing reference utilization was highly variable. Prescribers would likely benefit from a standardized guideline for prescribing empiric antibiotics based on AAP Red Book dosing recommendations.