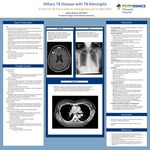 Context/background: Miliary tuberculosis is a condition that is fatal if not diagnosed and can present in the outpatient setting with vague symptoms that resemble a viral illness, therefore, can be easily missed. Recognition of this disease as a differential is important in the primary care setting, especially when caring for immigrant and International patient populations.

Case Description: A previously healthy 35 yo female from Vietnam whom presented initially to the ER for headache and fever for the past 2 weeks. She was diagnosed with acute viral syndrome given her symptoms, normal labs, and head CT, and discharged home. A few days later, she presented to an urgent care because she began having blurry vision, nausea, vomiting, lethargy and had incoherent speech. She did not have any URI symptoms, cough or hemoptysis. At the urgent care, she was noted to have some neck stiffness, fatigue, unsteady gait, and fever to 103F. They had her return to the emergency room for further workup. In the ED, she had an LP that revealed lymphocytic-predominant pleiocytosis, elevated protein, and low glucose. ID was consulted, from LP alone, differential included early viral meningitis vs bacterial (pyogenic vs AFB vs other atypical pathogens such as Listeria, Brucella, Syphilis) vs Cryptococcus. She was started on CTX, vancomycin, and acyclovir while workup was pending. She had a CXR to look for evidence of prior TB, which resulted in ”diffuse pulmonary nodularity.” Differential included respiratory bronchiolitis, miliary tuberculosis and other fungal infections, hypersensitivity pneumonitis and viral infection. After CXR, she was placed on airborne precautions and in a reverse flow room given possibility of TB. Because she had neurological symptoms, she received a brain MRI, which showed ”small ring-enhancing lesions in the left frontal cortex and right frontal cortex.” The following day, CSF resulted was positive for TB by PCR, confirming the diagnosis. Treatment with rifampin, isoniazid, pyrazinamide, ethambutol (“RIPE”) was immediately started. Contacted by the county health department and they stated that even though there was a diagnosis, a sputum sample was needed to determine level of contagiousness. She was unable to produce sputum, even with induction (she had no cough), therefore she had bronchoalveolar lavage for sputum culture, resulted in 3+ (moderate) Mycobacterium tuberculosis. She continued the RIPE regimen and was discharged from the hospital the following day.

Discussion: Although miliary TB is a rare form of TB (2% of TB cases), when missed it can be fatal, as mortality rate is between 15 to 30%. One of the main causes for high mortality includes late detection of disease caused by non-specific symptoms. Recognition of this disease as a differential is important in the primary care setting and when caring for international patient populations.